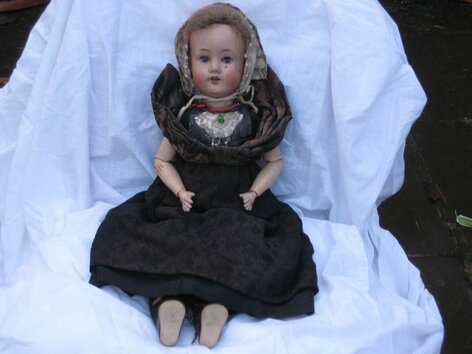 ​The Dutch Doll
Made in Germany and wearing one of the Dutch national costumes, she was given to me by the Dutch family my father was billetted with during WW2 - an enduring symbol for me of co-operation between nations.  Paul Martin's recent photograph  of her captures her beauty.
I was very grateful for our MP, David Rutley's offer of a press release after we had met to talk about the book. Here is an extract:
'Friday, 30 November, 2018   Local author, Jenny Martin, has written a new book, 'In Our Fathers' Footsteps', relating the experiences of  her and her husband's families during the Second World War, and local MP, David Rutley, met with her recently, to learn more about their remarkable stories.'
and, after giving details of my previous books, he ends by saying:
'As the Second World War moves from living memory to written history, it is all the more important that the experiences of those who lived through this defining conflict are recorded for future generations. In Our Fathers' Footsteps gives just such an account, and it was fascinating to learn more about the impact of the war on Jenny and her husband. It is also great that the Royal British Legion will once again benefit from Jenny's literary talent. I wish her continued success in her future literary endeavours, and hope that local residents will take the opportunity to read Jenny's remarkable story."

I can say now that his hopes were realised as judged by the sales and comments.